So last night I was in Shoreditch, that dull old provincial backwater, reading at the 8th birthday celebrations of hip alternative book night Literary Death Match. And, I’m even more delighted to report, I won! I was the winner!

Now, as anyone will tell you who has been to a Lit Death Match before, or has been crowned as one of their 360 previous champions, this is not something that should be equated with being, y’know, better than anyone else in the competition.

Indeed, the very amiability and absurdity of the whole process pokes a wry and really rather sensible snook at all the other literary prizes out there. Julian Barnes famously called the Man Booker “posh bingo”. Well, this was decidedly un-posh bingo, no matter that the night’s hosts, Adrian Todd Zuniga and Suzanne Azzopardi, did try to raise the tone somewhat with their stylish get-ups.

I was pitched against three others writers, one of whom, Naomi Wood, I know from UEA, and have read, the other two, Emma Jane Unsworth and David Adam, I don’t and hadn’t – yet. The finale came down to Naomi and myself in a duel-by-unwrapping-presents – paper vs stone; ‘The Killing’ vs ‘The Reviver’; a pen vs a sword; 10,000 rupee vs some other foreign money; a nutcracker vs a cricket box – meaning that while I won (I WAS THE WINNER!) nobody had to feel bad about it because it was really a bit of fun.

In any case, the real meat of the evening was the readings:

Naomi is getting a lot of acclaim right now for her novel Mrs Hemingway (I’m reading it right now, and it’s seductively, dangerously enjoyable – I feel I may be being lulled into a false sense of something) but she read something very different, a hilarious and spiky story called (I think) ‘Film Night’, about a couple who indulge in some increasingly icky sexual role play after their weekly themed sofa-bound film binge: very funny all the way through, but, at the end, very funny in a different way, as the couple morphed into Jude Law and Natalie Portman from Closer, for real.

Naomi was followed by David Adam, who read from his forthcoming non-fiction book The Man Who Couldn’t Stop, about the science of OCD, and coming after Naomi it was a brilliant one-two: his description of a schoolgirl in Ethiopia who ate the wall of her house – eating it, piece by piece, every day, was the only way to calm her obsessive thoughts about it – turned laughter to rapt silence, especially when he moved from the distant and jaw-dropping to the personal – he’s suffered from OCD himself. David’s doing talks at the Edinburgh International Science Festival and the South Bank Centre, and I thoroughly recommend going to hear him.

The third reader was Emma Jane Unsworth, who read from her forthcoming Animals. This was back to filthy, dirty sexy writing. She read the novel opening, which has protagonist Laura waking up in bed having in a quasi S&M accident affixed herself to it during the night, via a bangle slipped over the headpost and a tight-leg wrapped around the footpost.

I particularly liked the 50-something (former?) airline pilot who tempted Laura and her partner-in-crime Tyler back to his place for unspecified revels, only for them to find that this would be fuelled by an eighteenth of a bottle of gin – Unsworth managing to soak both the sad old man and the young women who thought he might show them a good time with equal quantities of undeserved pathos.

Me shamelessly playing to the crowd, with Suzanne, Adrian and Naomi (who has already won one of these) looking on in something like delight. Photo by Ben Meadows

Worth saying something, too, about the judges – Peter Rosengard, Rosie Wilby and Natalie Haynes – whose job is actually harder than the readers’. For a start, they’re on stage the whole time, sat on a lovely old sofa, and secondly they’ve got to come up with stuff to say on the spot about the readings – something that Rosengard, I’m afraid to say, failed at, being pretty much random, and badly misjudging the audience’s response to David’s reading (I think we’re past treating stuff like OCD as fodder for comedy, Peter). Rosie was spot on, but it was Natalie Haynes who, for me, won the gong of the evening.

She came to the event with a CV that frankly boggled the mind (novelist, stand-up comedian, claccisist, past Booker judge and judge of the current Independent Foreign Fiction Prize – longlist just announced). When she turned up she didn’t look particularly happy to be there (compared to the smiley pics you get when you Google her), but on stage she was funny and self-deprecating – and completely thoughtful in her responses. 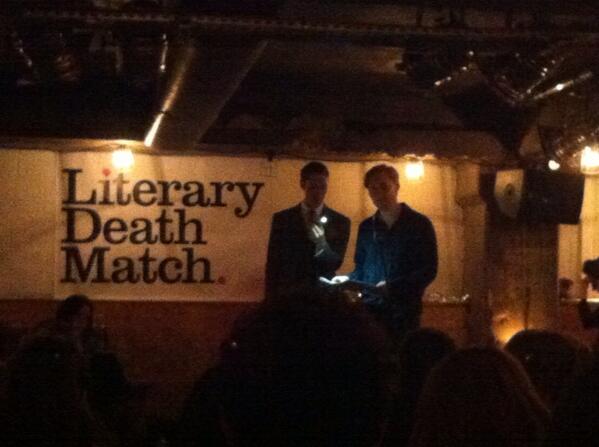 She’d been listening, which must have been heartening not just for the readers, but for the audience, too. After all, what, really were they doing there? Were they engaging with literature? Were they being entertained? Or were they hanging out in a hip bar in Shoreditch with good pizza available? Well, listening to Natalie’s responses to the readings, it seemed like all three were possible, and not mutually exclusive at all. I bought her book.

Me, I read from Randall, the fourth time I’ve done so, I think, but the first time since it solidified into a finished manuscript (give or take a few typos). But, with proofs not yet available, I was still reading from a printout, which meant that I was entirely able to edit the scene I wanted to read to fit the allotted seven minutes.

And this, really, is the lesson of reading out loud, I think. What I’ve written is a novel that I want people – you – to read, yourselves, at home. The words between the covers were not written to be read aloud, and so I completely reserve the right to alter it for that context, to turn it into a performance.

This doesn’t mean, though, that I change the story. I just change the experience of it – but in the service of the same story. A lot of what exists on the page is… not filler, exactly, but diversionary, performative, giving texture to the prose by creating gaps in the meaning-making, for the meaning to solidify in the reader’s mind. On stage, I can do that meaning-making with my pauses, my changes in pace and intonation.

I got through my round (against Emma) to meet Naomi in the finale, but the reading was what it was all about. I like readings! I want to do more. Festival curators! Event organisers! Bookshops! Get in touch!