“Tell me this,” says a character in Don DeLillo’s novel, Falling Man: “What kind of painter is allowed to behave more unspeakably, figurative or abstract?”

It would be easy enough to rack up examples on both sides, from fiction, no less than from real life. Novelists love artists as characters, after all. If books furnish a room, then artists furnish a novel – with their artworks, and their antics. You might say they are the perfect writer’s avatar: analogue, clown and straw man rolled into one. Their created work is so much more describable than prose, their creative act too. And they get to have models, some of them, to go to bed with.

My novel, Randall, is, in intention, an satirical and elegiac alternative history of Young British Artists and art world in general, and while writing it I’ve naturally collected a menagerie of other fictional artists, sometimes badly behaved, sometimes not, but all exemplary in the way they dramatize an aspect of human nature that is, by definition, out there. 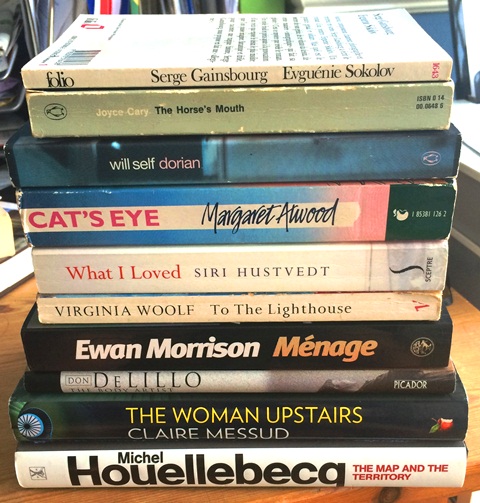 The Horse’s Mouth, by Joyce Carey

This is the obvious opener, the classic English novel of artistic eccentricity. In it, painter Gulley Jimson cuts a swathe of chaos through between-the-wars London, stealing and cadging enough money to buy materials and food, entirely driven by his creative instincts. Squatting in a patron’s empty house, he decides what Sir William really needs is a wall-size mural of the raising of Lazarus, and sets about it: “A good wall, as they say, will paint itself.” It’s a helter-skelter book, but with as much insight into the art and the artist as laughter at their expense

To The Lighthouse, by Virginia Woolf

A counterpoint to the Cary. Woolf’s painter, Lily Briscoe, is not concerned with art as a vocation, but as personal expression. Is she a Sunday painter then? Well, her thoughts about art are serious (“One wanted, she thought, dipping her brush deliberately, to be on a level with ordinary experience, to feel simply that’s a chair, that’s a table, and yet at the same time, It’s a miracle, it’s an ecstasy.”) so should we hold it against her that her painting is a private activity? Does that make her less of a role model?

The Body Artist, by Don DeLillo

There are artists and art works right through DeLillo’s oeuvre, but this short, brilliant novel, to my mind, is the most interesting of the lot. It follows the performance artist of the title, Lauren Hartke, in the months following the suicide of her husband, a film director. It performs a wonderful structural trick of pretending to be a book about grief, showing Hartke’s retreat into herself as a way of coping with loss, only to later reveal itself to be a book about art. Hartke performs a show in Boston and, though we never see it, we realise that everything we have seen her doing thus far, no matter how trivial, has been leading up to and informing it.

Boyd’s benign art world hoax presented itself as a serious monograph on a real but little-known American abstract expressionist painter, who supposedly threw himself off the Staten Island Ferry at the age of 31, after destroying nearly all his paintings. People may or may not have been taken in on its publication, but the book is more than a prank, it’s a melancholy treatise on the limits of biography. We know scarcely more about Tate at the end than at the beginning – the gaps and absences are all.

This ‘conte parobalique’ is the only published prose work by the French singer and, as you’d expect, it’s provocative in the extreme. Sokolov is an artist who translates his chronic flatulence into an aesthetic USP, letting the vibrations produced by his epic farts control the line of his pen, sending it waggling crazily like a seismograph. If that’s amusing enough, in a juvenile way, Gainsbourg is not shy of following the body humour through to its logical, far fouler conclusions.

The Map and The Territory, by Michel Houellebecq

Michel Houellebecq won the Prix Goncourt for this, his fifth novel, and though it is less blatantly provocative than much of the rest of his output, it still manages to pack a narrative punch. The artist at its centre is Jed Martin, who makes his name with a collection of photographs of Michelin road maps – a simple but effective invention, chiming with the particular relationship between the French and their country. But, boy, my heart missed a beat when I opened the first page to find Damien Hirst staring out at me.

Atwood’s novel has artist Elaine Risley looking back over her life – but I suppose I could have done without the childhood sections (there is no childhood in Randall, purposefully so: if the child is father to the man, then his ghost will be there on every page anyway). I loved the contemporary scenes, in which Risley bristles at the attentions of the gallerists and journalists that hover around her retrospective. Time spent explaining the past is time wasted.

What I Loved, by Siri Hustvedt
The Woman Upstairs, by Clare Messud

I had to put Hustvedt’s novel down half way through, so worried was I that it was doing exactly what I was trying to do with Randall: anatomise the places where serious critical artistic appreciation and friendship overlap. I loved the use Hustvedt made of Bill Wechsler’s fictitious artworks – especially the one with the artist’s shadow falling across it – compare, for instance, to Clare Messud’s The Woman Upstairs, with its descriptions of Nora Eldridge’s intricate miniature dioramas : too much work making something vivid, nothing for the reader to fill in – no fictional equivalent of the metre or more of blank space that exists between the viewer and the work. At the time of writing I haven’t yet read Hustvedt’s latest, The Blazing World, which if anything is even more set on the creation of a fictitious artist. (I didn’t like the second half of What I Loved, when it moved away from its initial subject.)

Ménage, by Ewan Morrison
Dorain, by Will Self

Along with Will Self’s Dorian and Great Apes, Ménage is the most concentrated attempt to fix down the Young British Artists in fiction, though, unlike Self, Morrison takes the period seriously. I suppose Self does too, though he seems unable to untangle his seriousness from his default satirical style. Interestingly, both Morrison and Self feature a video artist in their books (Dot Spears in the Morrison) – one of the most central YBA forms, and one of the most difficult to write about! I was already writing Randall when I read Ménage, and was glad that, despite superficial similarities aside, they ended up very different books.

I pitched this idea as a Writer’s Top 10 to the Guardian. They passed (too similar to Rachel Kushner’s recent one), but I will be contributing to the series in due course.