That pile of books looks more impressive than it should. I didn’t read all of the books there cover to cover. The two MacNeice books arrived only at the end of the month, and so far I’ve only read them scavenger-wise, mining them for the parts about the writing of ‘Autumn Journal’, MacNeice’s book-length poem that I’ve been using as a model for a poem I’m writing on our current Covid-times, called ‘Spring Journal’, that you can read here. I also wrote about Ana María Matute’s excellent novel, The Island, here.

The essays (Lydia Davis and Natalia Ginzburg) I’ve been dipping in and out of, as you should with essays. Reading the Davis is perhaps the odder experience. She is so marked by her style, so wedded to it, you might say, and that style across all her writing is so essaystic anyway, or bellelettristic – and on occasion faux-essayistic, faux-bellelettristic – that the essays themselves seem to almost dissolve in their own solution.

Her stories often read like boiled-down or reduced essays, like you reduce a sauce – but reduced to the level of density and taste that Heston Blumenthal would approve of – but they also often seem to be poking fun at the idea of essays, of the gap between their confidence of delivery and the meaning of what is delivered.

None of the essays in the book are as outright enjoyable as the best of her stories, and the very placidity of her voice – placidly arch, you might say – means I kind of drifted through them. Some of them I must have read three or four times now, without them becoming fixed in my mind, good though they are.

(The essay about fragments, for example: how perfect, how useful, how now, how me: I love fragments! And she is interesting and useful about fragments, and she carefully considers various people who write in fragments, or forms that are akin to fragments, but at the end of it I’m no wiser than I was at the beginning.)

Perhaps she is trying hard not to be showy in her writing, which is good, in a way, but in another way it is not good. Certainly she is never aphoristic. She is only aphoristic in her stories, where she is lampooning aphoristic writing, with its idea that you can boil down wisdom into apercus:

Remember that thou art but dust.
I shall try to bear it in mind.

Natalia Ginzburg is, on the face of it, a very different kind of essayist. (For those that don’t know, she was a prolific Italian writer and political activist who lived through the second world war, though her husband was murdered by the government, and lived to the early 90s.) She is not primarily writing about literature, and so about things thought, but about life, and lived experience.

(Davis seems to give the sense in her writing that she has not experienced anything in her life that has not been thoroughly, even entirely mediated by words. If you walked up to her and tweaked her nose, she would be thinking about the word ‘tweak’ before the sense-impression of the physical act had even reached her brain.)

The Little Virtues (published by Daunt Books) is another book that I have picked up more than once, and read bits of, and probably reread some bits of multiple times. Perhaps it took reading it under lockdown to really make it stick. Ginzburg is a simple writer, rather in the way that Davis is a simple writer, but the difference is that I am reading Ginzburg in translation, whereas Davis always reads like I am reading her in translation. END_OF_DOCUMENT_TOKEN_TO_BE_REPLACED

On the evening of Thursday 19th March 2020 I was lying on the sofa, phone in hand, when I had the idea of tweeting about the coronavirus epidemic in short poetic bursts, inspired by Louis MacNeice’s wonderful long poem ‘Autumn Journal’. I have used Autumn Journal in teaching poetry to undergraduate students, offering it as an example of how to write outwards from the self, how to mix politics and the personal to give a sense of how you see the world. I could do that, I thought. I could do it on Twitter.

I created a new account, @SpringJournal, and wrote two tweets that evening, and six more the following day. Each tweet contained four lines of poetry in MacNeice’s “elastic kind of quatrain”, with rhymes coming on alternate lines, but the line lengths immensely variable, while still keeping to a sort of rhythm. As well as his easy, down-to-earth way of tackling his themes, one of the other things I love about MacNeice is his rhyming. He allows for awkwardness in his syntax, he can be occasionally leaden, but he uses rhyme to pay things off, like a bell till chiming to mark the end of a transaction.

I’ve written more about the poem – and am posting Cantos as they are completed and edited – on a page on this blog, here. 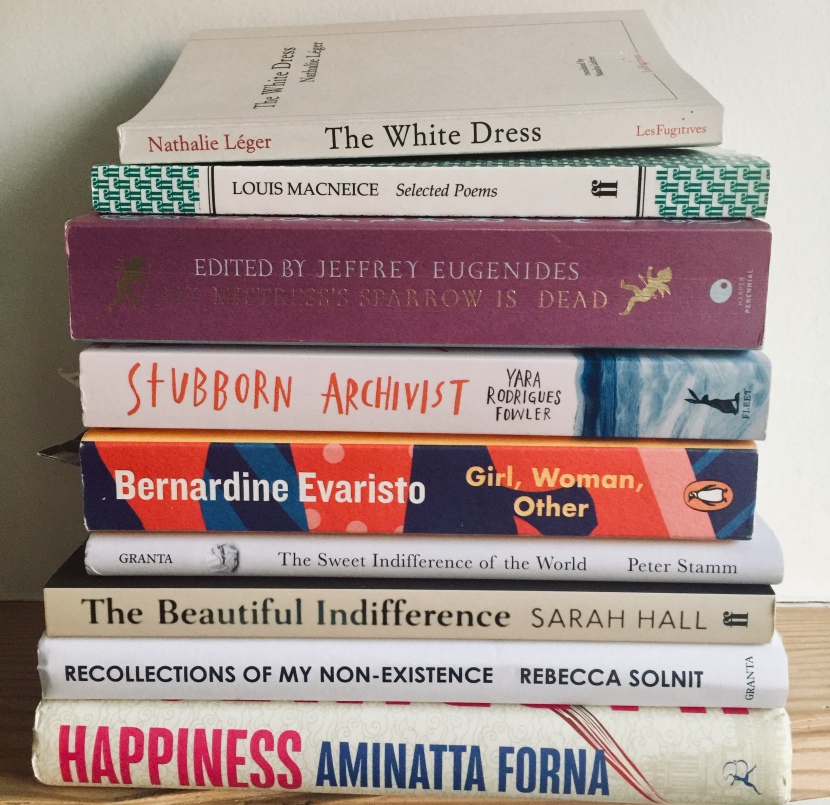 I have this problem with the novels of Peter Stamm. I love reading them, but they evaporate from my reading brain after I have read them – like the conceptual artist mentioned in Nathalie Léger’s The White Dress who pushed a block of ice around Mexico City until it melted entirely away. All that is left from my reading of All Days Are Night is a sense of a couple coming together in a ski resort, and an all-night rave of some kind, and of the relationship not working; Seven Years I remember barely at all; To the Back of Beyond is more memorable, perhaps because more high-concept: it is a novel built on an audacious idea that all the same builds that idea into something subtle, and moving.

The only thing I could remember about Stamm’s latest novel, The Sweet Indifference of the World, when I put it in that stack of books read in March, and photographed it with my phone, was the idea of the doppelgänger – which is also foundational to To the Back of Beyond. Beyond that, I could remember not a thing.

Writing this, though, the book has come back to me. It is just as audacious as To the Back of Beyond, and for that reason cannot be described. Let me repeat that Stamm tends to write books that start from an audacious conceit, but which drift away from it, or sink down into it, or in any case hedge or fudge their treatment of that conceit, so that you are never forced to actually judge it in the clear light of day, as you would with a piece of speculative or fantastical fiction that leads you to ask: yes, well, but would it actually work like that?

There is a kind of disintegration loops approach to the writing here – these are thought experiments that are allowed to unfold only so far until they start to disintegrate, while continuing to unfold.

Or: they are Schrodinger’s Boxes novels, that allow their conceits to both be and not be, and honour both in the telling, on the page, where normally things just are.

I’ve just picked the book up and flicked through it: no notes, no underlinings, which is unusual for me. And as I flicked through the book I thought about the nasty trick it plays with its gimmick; and that that’s precisely the reason for having it. It’s a book that undermines its own narrative strategy, or at least its narrator, that kills him off and leaves him alive to see it. It made me think of Simon Kinch’s excellent Two Sketches of Disjointed Happiness, which plays a more similar trick, I think, to To the Back of Beyond. There is something to be written about doppelgängers in fiction – not the simplistic Jekyll and Hyde type, but the type of novel that plays with the foundational idea of narrative that the narrator is a stable, indivisible unit. There’s also Geoff Dyer’s The Search. It is only men who write this kind of novel?

A thought experiment novel, I like that. Perhaps also a little like a Borgesian novel, if Borges hadn’t been too lazy (to use his word) to write one, and had had the patience to let his conceit roll out and gradually disintegrate, like the 1:1 scale map in That Empire in ‘On Exactitude in Science’.

Just for reasons of titular symmetry I’ll move from Stamm to Sarah Hall’s The Beautiful Indifference. Now, I’ve never quite managed to get to grips with Hall as a writer: I’ve failed to make significant headway with any of the novels of hers I’ve tried, and although I remember being quite affected by the story ‘She Murdered Mortal He’ – the part with the creature following the woman along a beach in some far off holiday country – and I’m sure that I did get to the end of the story at least once, I was still surprised by that ending when I read it this time.

This time I read it because Hall was again picked as part of a Personal Anthology. END_OF_DOCUMENT_TOKEN_TO_BE_REPLACED