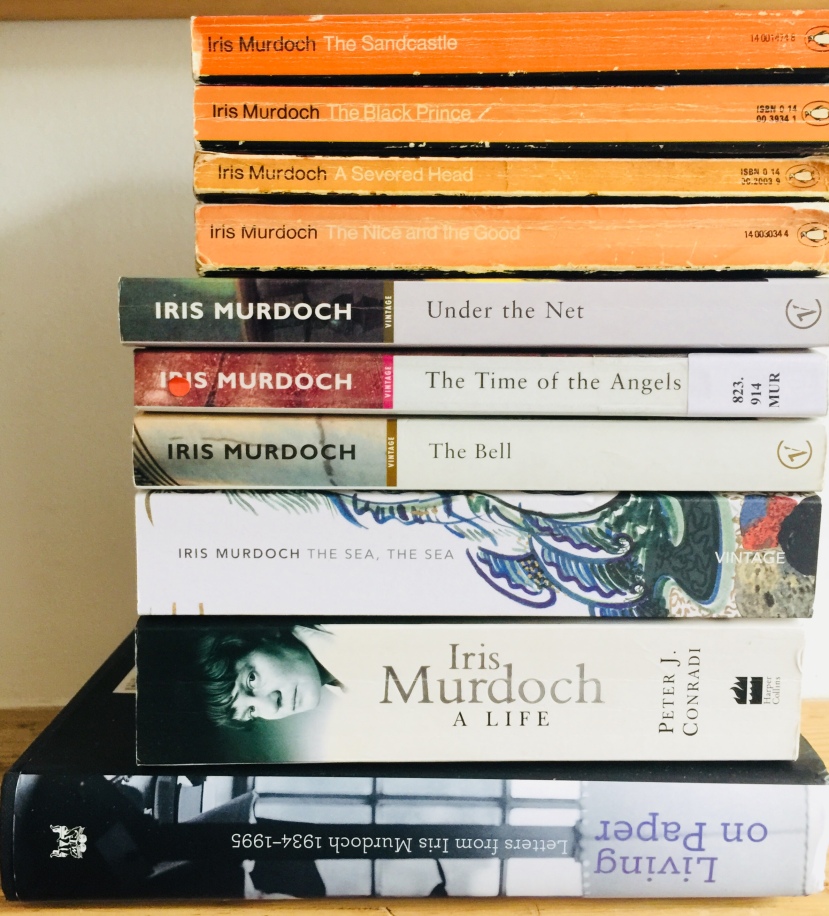 I read other things in March, but mostly these were rereads of books I’ve been teaching on the novel-writing MA at St Mary’s, Twickenham, and short stories picked up from A Personal Anthology.

Mostly, though, I was reading and rereading Iris Murdoch ahead of a panel discussion with Alex Clark and Catherine Taylor at the Cambridge Literary Festival this weekend. It was a lively and stimulating hour’s talk, and only solidified my sense that she was, above all, a hugely accomplished novelist.

After a somewhat shaky start, my recent run of Murdoch novels has been one of unalloyed reading joy. Here, then, are some comments worked up from notes I made ahead of the talk:

Crazy plotting – and lack of interest in M’s biography

I’ve not read any of John Bayley’s books about Murdoch and, while I’ve read (some of) Peter J. Conradi’s biography, I didn’t find it particularly illuminating, and didn’t finish it. (I prefer his critical book, The Saint and the Artist.) I certainly didn’t find much to treasure in the recently published book of letters, Living on Paper, very well edited though it was. (My review here.) Basically, I’ve never really found anything in Murdoch’s biography that deepened my understanding or increased my enjoyment of the novels. The novels are enough.

Perhaps the novels’ crazy, precipitate, highly compressed plotting –  usually taking place over a matter of days or weeks – is an attempt to make sense of the much bigger chaos of her life.

That’s all that art is, after all: an attempt to impose order on – or draw order out of – chaos.

An exchange from Stoppard’s Arcadia, that could be taken as explicatory:

HANNAH. The weather is fairly predictable in the Sahara.

VALENTINE. The scale is different but the graph goes up and down the same way. Six thousand years in the Sahara looks like six months in Manchester, I bet you.

The plotting in Murdoch is overtly theatrical: Shakespearean, or Restoration Comedic. She gathers a small-ish cast in a contained setting, or series of settings, and sends them bouncing around like molecules in an ever-tighter compression chamber.

How often in our lives do we have had someone knock on our door, unannounced, to deliver good or bad news, let alone tell us that they love us? It happens a lot in Murdoch’s novels. But, as I say, this shouldn’t be taken as a realistic reflection of everyday life, but as the compression of a life’s worth of living into a short, ecstatic and exemplary period.

Morality in a post-religious, post-Freudian age

Morality has many arenas in which it can play out, yet in Murdoch it plays out most usually in the arena of sexual relationships – through the questions of right love, adultery and faithfulness.

You can’t be true to God any more, since He doesn’t exist, but you can (or can not) be true to your wife, husband or lover. God is no longer the authority you must answer to, but Freud.

“The disappearance of God does not simply leave a void into which human reason can move. The death of God has set the angels free. And they are terrible.”

“There are principalities and powers. Angels are the thoughts of God. Now he had been dissolved into his thoughts which are beyond our conception in their nature and their multiplicity and the power. God was at least the name of something which we thought was good. Now even the name has gone and spiritual world has scattered. There is nothing any more to prevent the magnetism of many spirits.”

From The Time of the Angels, which I recently read for the first time. It is a stunning example of Murdoch’s process. It is also the darkest of her novels that I’ve read. No surprise that it was followed by The Nice and the Good, which is one of the lightest and most joyous, out-leavened only by The Sandcastle.

Sympathy for all her characters

We are all each other’s antagonists.

Even Carel, surely the blackest of all her characters, is presented sympathetically.

The novels (the best of them) are so expertly constructed, deploying their elements and then entangling them and setting these in conflict with each other, that they at times seem like exercises in counterpoint. John Gardner talks about the novel as symphony. These are not that, but they at times seem like a miraculous two- or three-part invention. Chamber music, played at double speed – like something from Switched-on Bach.

Compulsively rather than carefully written

Someone (Conradi?) talks about Murdoch’s refusal to slow down her novel writing, even if that might have improved her work. (She wrote 26 novels over a period of 41 years – a novel every 18 months!)

No. She wanted to work through a particular problem. When she had done this, it no longer interested her. On to the next one.

Might it have been an aspect of her success, considering the times in which she lived and published, that she seemed happy to explore ‘universal’ human concerns through male protagonists?

Many of her protagonists are middle-aged men, or older, who seem to have no problem in having much younger women fall in love with them. Male writers get hauled over the coals for this. Murdoch, not so much.

(Obviously, she treated male homosexual characters seriously, when it was not usual to do so.)

The idea that these might be intended as analogues for the concrete descriptions of abstract mental states.

The lack of interest in the free indirect style/close third person.

If the contemporary literary novel is often interested above all in the nature of consciousness, and invested in the ability of prose to blur the lines between character and the perceptual world (a phenomenological aesthetics), then Murdoch has no interest in either of these things. She sees the world clearly. She sees the insides of her characters’ minds equally clearly. She keeps both separate.

At the end of the session, Alex asked us all to name our favourite Murdoch. I was expecting Catherine to say The Black Prince, about which she had written a marvellous essay in the Brixton Review of Books. But she said The Flight from the Enchanter (which didn’t bowl me over; I need to revisit it). So I said The Black Prince, only for Alex to say that that was what she had been going to choose. So I chose A Severed Head instead, though kind of wishing that I could also have had The Nice and the Good.

Basically, of the Murdochs I’ve read, here are the ones that I feel are definite successes, perhaps in a kind of order:

And these are the ones I’ve not been so impressed with:

(By the way, I popped into Kirkdale Books this afternoon, and asked Roland – who read all of Murdoch, in order, a year or two ago – how far through you could get before the novels starting getting, well, not very good.  He said that, of the late books, The Good Apprentice and The Book and the Brotherhood were certainly not to be dismissed. The three that came after – The Message to the Planet, The Green Knight and Jackson’s Dilemma – were all essentially flawed.)

So, many thanks for Alex and the Cambridge Literary Festival for inviting me. Oh, and why did they do so? Well, because of my recently published novel, The Large Door, which features epigrams from Murdoch and her friend, lover and sparring partner, Brigid Brophy, and a sort of joint dedication. Which epigrams did I choose? Well, you’ll have to buy the book to find out. 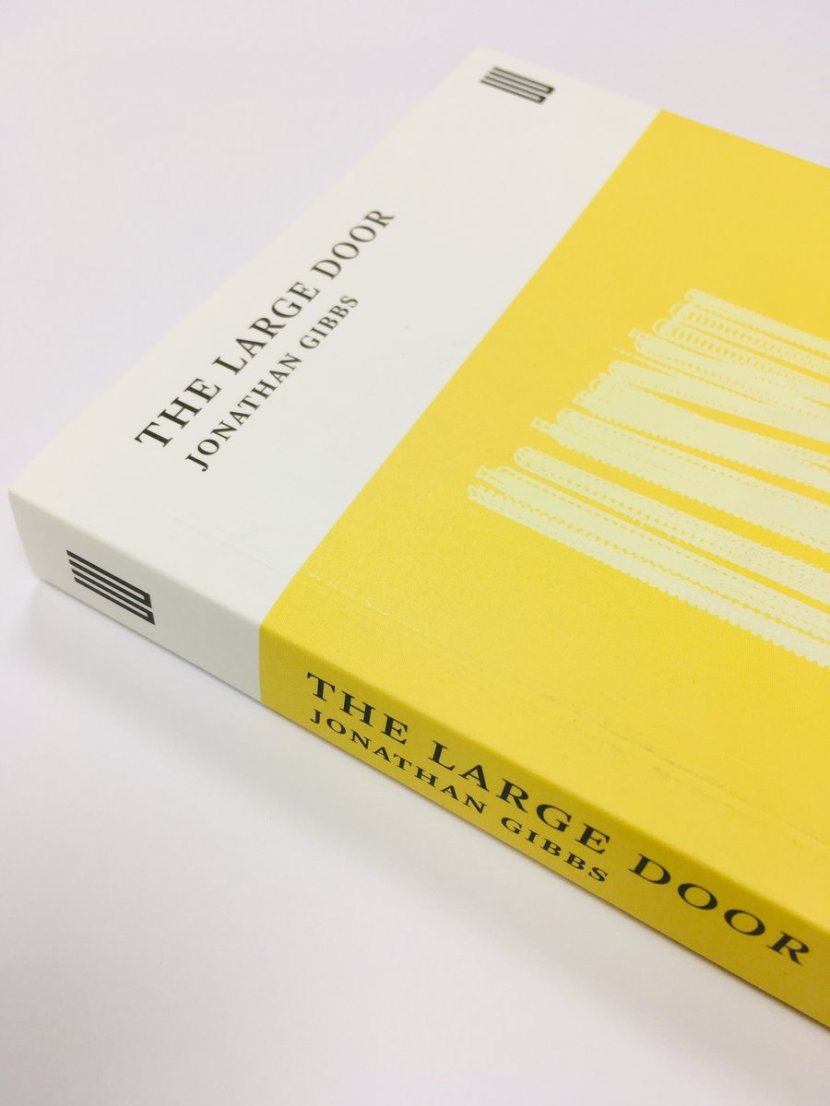 To Waterstones Piccadilly on Wednesday night to hear and join a debate on ‘the purpose of the arts today’, based on Raymond Tallis’s book Summers of Discontent – essentially a careful selection of his previous writings by writer and gallerist Julian Spalding. This isn’t one of those socio-political treatises that tries to explain why we should go on pouring so many millions a year into the Royal Opera House, or why the Arts Council budget should be slashed or increased, but rather a philosophical discussion of what the art encounter, whether it be literature, music or theatre, can give us, as existential, post-religious human beings.

Tallis’s premise is that we as humans suffer a ‘wound’ in the present tense of our consciousness, such that we can never be fully present in our lives, but are always late to our own experiences. Art, he says, can help with this by showing how disparate formal elements can be integrated into one unified work; it offers both a model for how to do the same with our own scattered and disparate memories, thoughts, impulses and anticipations, and also a hypothetical space in which to do that work. It gives us a here and a now to be present in.

I was asked, along with philosopher Roger Scruton and classicist Stephen Johnson, to respond to Tallis and Spalding’s remarks, before the debate was opened to the floor – my ‘role’ being that of novelist, and of novelist about ‘the arts’. My no doubt disjointed comments amounted to some of what follows:

that I fully approved of the notion of the wound in the present tense, and of art’s ability to – partially, temporarily – heal or alleviate it, and of doing so by modelling and facilitating formal integration (where, as Tallis points out, ‘form’ is taken to mean the inside, rather than outside shape of things), but that this is surely an ideal, rather than a usual occurrence.

Tallis was starting from a position where he talked about “art when it is at its best and we are at our most connected” – when, to my mind, most of the time neither of those things is true. (In fact there’s a lovely description in his book of listening to a Haydn Mass “while the squeaky windscreen wipers are battling with rain adding its own percussion on the car roof” – and that is think is how we experience most art.)

As a novelist, I want my writing to be at its best, and my readership at its most connected, always, but as a novelist who writes particularly about the arts (the contemporary art world, in Randall, and the world of pop music in my new book), what I’m interested in is the ordinary failings of poorly connected people responding to less than great art – but who, crucially, are no less committed to that project of arriving at a place of integration and connectedness.

I gave the example of seeing Fleetwood Mac at the 02, a pretty good gig in a dismal setting by a band of which I’m not particularly a fan. (I love the album Tusk to bits, but can do without the rest of their stuff.) I responded variously to the music, leaping up at the songs I liked, nodding along to the rest, but what really got me was the response of the other audience members. There were men in the 60s, podgy and balding, as I’ll doubtless be at that age, standing there agog on the concrete steps, hundreds of metres away from their idols, faces slack and eyes streaming with tears. END_OF_DOCUMENT_TOKEN_TO_BE_REPLACED