Two scenes from books I’ve read and now can’t place, and which niggle me for that reason. I write them down in the hope that someone can identify them for me – or that, if no one does, I can claim them for myself.

1. A scene in a stationery shop. We are in Europe, early or mid 20th Century, or perhaps that part of Midwest or northeastern America which once was Europe. The narrator, or protagonist, is on a return visit to the small town he has otherwise left behind. He is a young man now, or perhaps still just about a boy, in the last years of his teens. But probably a young man. The shop is old-fashioned, with a counter and shelves behind it. I don’t know what he is after: ink, or printer ribbons, but the girl, or young woman, behind the counter has to go up a ladder to reach it down for him. A step ladder. Shelves packed tight with the materials of writing – the protagonist must be a writer – that must be the point of the story. But, in truth, it is the girl or woman he has come to see. She was either his girlfriend, when he lived in the town, or his friend, or the object of his desire. She is what he might have aspired to, had he stayed – had he not left town to ‘become a writer’. Her father owns the shop. I don’t know if he is physically present in the scene, or only in spirit. I don’t know if the young woman, recognises the young man. I get the sense that he has come back half-hoping she will recognise him, that he can ‘take her away from here’, but also half-fearing the sight of what might have been, had he stayed – that his own doppelganger will be stood alongside her behind the counter. Will lay his hand on her arm, stare him out. I think I might be going beyond the bounds of the scene into my own concerns. In any case, it is an old story – the boy writing himself out of the ghetto, the woman as symbol of domestication. Here’s what you could have won. When what you have won is the endless loss of ‘being an artist’. I’ve been reading Lewis Hyde’s The Gift.

2. This isn’t so much a scene as the whole premise or conceit of the story. A man is sent to prison. The prison is circular, like a wheel. It is built of stone, with stone walls radiating from the centre like spokes from the hub of a wheel. Each cell a segment, capped at its far end by the exterior wall. The spokes, however, turn, rotating clockwise above the stone floor. They turn slowly, moving millimetre by millimetre as they are pushed by the inmates. Soon after entering, they have moved enough that daylight is lost. This is their punishment, that their jail term is fixed by their communal efforts to push the walls until the wheel has come full circle and they can leave the way they came in. They never see another inmate, but can hear them. It sounds like bad Kafka, or Borges, but I can’t find it in them, and I don’t want to Google it, for fear of what I might find.

One of the most famous of the Kafka fragments used by György Kurtág in his song cycle Kafka Fragments (which I wrote on  after seeing it staged recently at the Royal Opera House) is this:

In the struggle between yourself and the world, side with the world.

Now, I recognised this from The Zürau Aphorisms, a collection of fragments written by Kafka at his sister’s house, where he stayed for eight months over the winter and spring of 1917/8,  recuperating from his first bout of tuberculosis. However, in my Harvill Secker edition, translated by Michael Hofmann, it reads thus:

In the struggle between yourself and the world, hold the world’s coat.

It’s a classic example of the translator’s dilemma: to follow the literal sense of the original phrase, or to honour the soul of the phrase, the echoes and traces it holds. The primary meaning of ‘to second’ is certainly to back, or support, but in the context of a struggle – or equally, a battle, or fight, if we go back to Kampf – the image of a duel is hard to ignore.

To second someone in a duel is to do far more than simply be on their side: it is essentially, to be at their side, carrying their coat, yes, and offering psychological back-up, but above all supporting them with your physical presence. Hofmann might be overstepping his bounds in introducing a clear and vivid image that was not there in the original, but he is certainly honouring some part of the soul of what Kafka wrote.

Above all, he is bringing out the absurdity at the heart of the aphorism, that “side with the world” neglects. The image of the individual, when facing the world with a sword, or pistol, in his hand, some misty dawn, surreptitiously leaving his body and sidling round to hold the coat of his opponent, is wonderful, and brings to mind the kind of tricks Bugs Bunny works on Elmer Fudd or Yosemite Sam.

So, last night to the Royal Opera House, to see a performance of Kafka Fragments, by György Kurtág, with Peter Manning on violin and Claire Bloom soprano, the piece staged by Netia Jones.

It is a strange piece (and how could it not be?), that takes 40 short passages from Kafka and makes of them what you might call a song cycle, though you would be hard pushed to find any kind of narrative or development, as you might in Die Shöne Müllerin or Winterreise, for example

One or two pieces are repeated, in altered settings. Perhaps that is the closest you get to some kind of inner structure.

The settings are at once virtuosic and disjointed, as if to show that these texts demand a supreme and indeed extreme effort in order to find in them, catch and then hold onto a single clear meaning.

The music – violin and voice – jumps about like a landed fish.

The shortest pieces last mere seconds – the very shortest consists of a single word, “Ruhelos” (restless) repeated twice. It made me think a little of Napalm Death, the thrash metal band known for the brevity and intensity of their songs, especially as on the second ‘Ruhelos’ Bloom collapses to the floor. END_OF_DOCUMENT_TOKEN_TO_BE_REPLACED

I’ve been dipping into this intriguing new Penguin Classics anthology, Tales of the German Imagination, which attempts to draw a nightmarish line through Germanic literature from Kleist, the Grimms and ETA Hoffmann through Rilke, Heine and Kafka to more recent times, picking up plenty of unknown or forgotten writers along the way to slot between the heavyweights. (I say Germanic, rather than German, to imply a connection between the temperament and  the language, rather than the nation.) 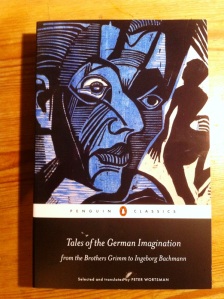 There’s some excellent stuff in there, of course, and I’m currently working my way from the knowns to the unknowns, but of immediate and real, though incidental, interest, is editor Peter Wortsman’s introduction, which rather confusedly seems to set Kafka (represented in the collection by ‘In the Penal Colony’) as the lynchpin of his selection, while trying to argue at the same time that “the visionary German-speaking Jewish scribe from Prague” (ugh!) should be understood in the context of his precursors and contemporaries, both Germanic and not, rather than simply as sui generis.

Perhaps the reason he devotes so much time to Kafka is so as to include in his introduction two thoroughly worthwhile anecdotes. END_OF_DOCUMENT_TOKEN_TO_BE_REPLACED