I started the month finishing Elizabeth Jenkins’ The Tortoise and The Hare, a mid-20th century novel reissued in chichi hardback (there’s becoming something of a glut of them, isn’t there?) by Virago, with an introduction by Hilary Mantel. It was a Christmas present, though quite why my wife chose to give me a book about the breakdown of a marriage, I’m not sure. 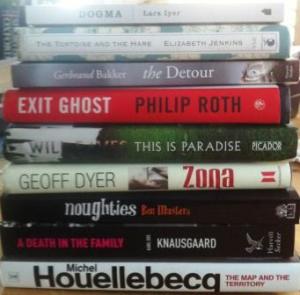 The novel is one of those (like Chesterton’s The Man Who Was Thursday) that is entirely governed by the formal gesture of its narrative: in this case, the gradual and implacable usurpation of the wifely role to rich, shallow barrister Evelyn Gresham by ‘handsome’, practical Blanche Silcox – to which Evelyn’s floaty, feminine wife, Imogen, can only stand by and watch. Any deviation from this movement (the possibility of Imogen having an affair, the needs and desires of the Greshams’ horrid son Gavin) gets dragged into the slipstream of the narrative and ruthlessly flung aside.

The key moment of the book comes for the reader when they realise that there is nothing organic about the plot’s progress: it is entirely teleologically determined. Jenkins knows exactly where her characters are going to end up: Blanche in Imogen’s place, Imogen cast out. It’s as mathematical as a Pinter short, or Ionesco’s The Lesson. There is something unreal about the bluntness of this reversal, though it’s mitigated by the domestic texture of the prose. (That said, the book does commit a venal sin: “books that include minor characters just to satirise them”)

Here is Karl O Knausgaard on form: “Form, which is of course a prerequisite for literature. That is its sole law: everything has to submit to form. If any of literature’s other elements are stronger than form, such as style, plot, them, if any of these take control over form, the result is poor. That is why writers with a strong style often write poor books. That is also why writers with strong themes so often write poor books. Strong themes and styles have to be broken down before literature can come into being. It is this breaking down that is called ‘writing’.” (From ‘A Death in the Family’ – more on this below.)

Exit Ghost was the first Roth book I’d read for a long, long time. The only book of his that I’d fully enjoyed before this was Deception, and I’d tried and failed with plenty of others (including The Plot Against America, American Pastoral, Nemesis) – perhaps because they were too much concerned with an American experience that I found distant. Exit Ghost, however, is entirely cemented in the recent past: published in 2007, set in 2004, during the presidential campaign that saw Bush re-elected.

What moved me most about the novel was the mastery of its narrative voice. Having just finished a novel and sent it out into the world, I’m rather obsessed with the basic literary question of what makes the reader want to keep reading – on the basis that many books start better than they end. See Scott Pack’s thread on Giving Up and @jonnygeller’s 1 Feb tweet:

What I think – not rocket science, this – is that books either make you want to read on because of your interest in the characters and the plot (these are essentially the same thing: plot being what happens to characters; characters being the recognisable entities in the book that act and are acted upon) or because of the charisma of the narrative voice. With Exit Ghost, it’s the latter. By the fourth page, when the elderly, incontinent Zuckerman describes swimming in his Berkshire pond and leaving in his wake “a thin, billowing cloud of urine that visibly discolours the surrounding pond waters”, I knew that I would be reading to the end of the book, no matter what did or didn’t occur in it. Plot and character were, more or less, irrelevant.

No one can write as well as this, I tell myself, without decades of practice. The confidence with which the novel proceeds is astounding. Roth incorporates: rants about Bush; a queasily predictable plot about Zuckerman’s unexpected desire (oh yeah?) for a young New York woman, Jamie, he meets by chance; sections about the writer E.I. Lonoff (cf The Ghost Writer); and, most strangely, a series of dramatic dialogues written by Zuckerman imagining flirtations between himself and Jamie. Roth, seemingly, puts in whatever he wants. Yet however wayward the novel’s content, the style is severe, constrained, magisterial. It holds you with the same hypnotic glare as the face on the back cover. I’m scared to go back and explore more Roth, in case it fails to live up to this.

This question of what makes a reader keep turning the page applies, too, to Gerbrand Bakker’s new novel The Detour (following the Impac-winning The Twin). This is an almost plotless, strangely characterless novel, which however doesn’t major in the kind of burning-cold narration stylistics of Roth. In it a Dutch literature lecturer, Emilie, ups sticks to northWales. At first she seems on the run from a scandal involving sex with a student, but gradually it becomes clear there is more to her desire for isolation than this – that we’re in for more than a re-run of Notes on a Scandal.

Reading the book, enjoying it, being puzzled by its slow, affectless accretion of micro-events, I found myself wondering: I wonder what’s going to happen next? This might seem like a natural thought to be having. It’s what writers want readers to think, after all. But the difference here, as compared to so many other run-of-the-mill novels, is that the pond that this thought bubbled up out of was characterised by the broader, unvoiced possibility that nothing might happen at all. And that, frankly, is not a usual thought to have about a book. Books have plots. Things happen in them. It’s an assumption shared by most readers, and by most novelists, and it colours our reading (and their writing). Even Don DeLillo’s Point Omega, which tried to slow time down, and stretch it out, until it turned into the desert, was still haunted by the sense that drama was waiting, in the wings, for its moment to bound on stage, dagger in hand. Bakker’s achievement, in this almost Zen-like book, is to drain anticipation from the reading experience.

I read Houellebecq’s novel, The Map and the Territory, with trepidation, as it is about the same world – of contemporary art – that my just-finished novel is about. They’re different books, I’m glad to report, with different intentions. I enjoyed, as (almost) always, the cold, sure distance of Houellebecq’s perspective on the world that you and I live in – so different from Roth’s. Roth hypnotises. Houellebecq won’t even meet your gaze. There’s a brilliant twist in the book which has made me recommend it to friends who say they gave up on it. Some of them have complained about the translation but, without having seen the original (though I’ve read a couple of his previous in French), I’d like to think that, if it’s bad, it’s bad on purpose. Houellebecq simply has no interest in sentences. If he could write a book without using them, I’m sure he would.

I’m not convinced by Lars Iyer’s Dogma. It reminded me of the way Ricky Gervais and Stephen Merchant treat Karl Pilkington. Like a lot of people, I don’t like Ricky Gervais, Stephen Merchant or Karl Pilkington. I’d rub them all from the face of the planet if I could. Not so with Iyer. His literary manifesto Nude in the Hot Tub, Facing the Abyss is cogent and seductive (it’s a manifesto, after all) and deserves a proper response, but I’m not sure that Dogma and Spurious work better as novels than they did as tweets or blog posts. It’s a book that dares you to put it down. The what happens next so clearly doesn’t apply to it. The same thing is going to happen on the next page as happened on this. I put it down. Which doesn’t mean I won’t pick it up again.

I blazed through John Burnside’s Glister (novel), Waking Up in Toytown (memoir) and Black Cat Bone (poems) prior to seeing him read at UEA. (He was supposed to be doing an informal seminar for postgrad students beforehand but a death on the line from London put paid to that.) The poems did nothing for me – still less when he read them; for someone who espouses Mandelstam’s method of ‘writing on the breath’ (ie composing by reciting to oneself, outloud or under the breath) he’s not a very good reader of his own poetry. Though perhaps the fact that this was the day after his TS Elliot poetry prize win had something to do with that. Glister I found claustrophobic and tedious. It seemed to delight in denying the reader pleasure in any of its aspects. Waking Up in Toytown, though, is the real deal: a memoir that insists on the play of memory; that takes up the merest corner of the writer’s life, twenty years gone, and turning it in the hands to see why that bit, that event, that person, of all the things and people he’s known, should have stayed with him, when so much else is consigned to oblivion.

I read Ben Masters’ debut novel, Noughties, for review for The Independent. (link to follow when published)

I read Geoff Dyer’s Zona, his book about Tarkovsky’s Stalker and – more generally – film, and – more generally still, as in all of Dyer’s books – pretty much everything. It took me about the same amount of time to read as it takes to watch the film. By page 10 I was wishing he hadn’t written it. By the end I was wishing that I had the power to force every writer (every writer) to write their version of it.

If I was king, every writer would have to write a 200-page study of Tarkovsky’s Stalker, with an appendix noting exactly where they’d stolen which bits from.

Only, of course, that’s not my idea, it’s Dyer’s. (“One way or another we all have to write our studies of DH Lawrence.”) I hope to write more on Zona.

I finished the month reading Karl O Knausgaard’s A Death in the Family for review in The Financial Times. Look it up: it is the first of six volumes of memoir-as-fiction that in Norwegian has topped 3,000 pages. Knausgaard’s only other translated novel A Time to Every Purpose Under Heaven is one of the most astonishing novels I’ve read in the last ten years. Here’s my Independent on Sunday review of it.

I finished the month reading Will Eaves’ This is Paradise, for review in The Independent. Links to these, too, to follow.