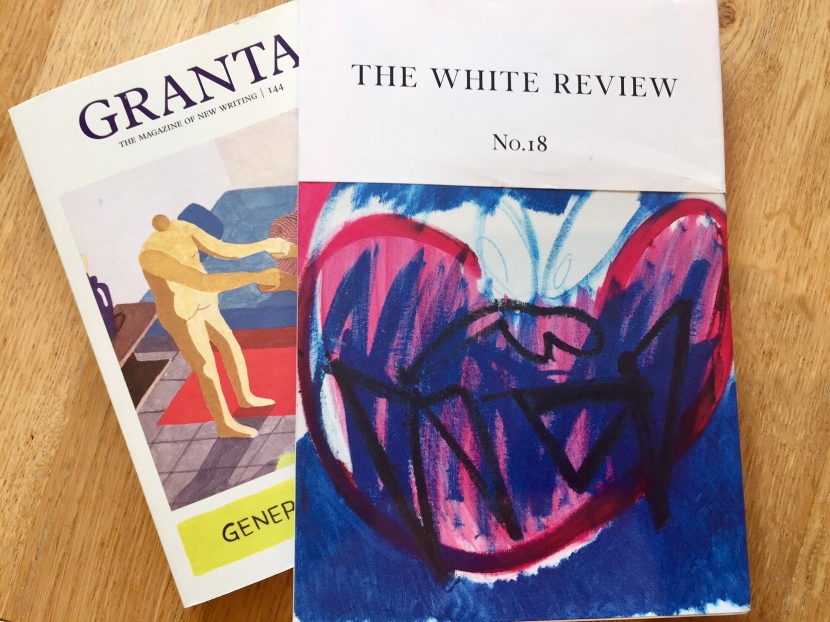 I hadn’t read any Sally Rooney until a couple of days ago when I was reminded on Twitter that there was a story in a back issue of The White Review that features the two characters – Marianne and Connell – from Normal People, Rooney’s Booker-longlisted and roundly lauded second novel. (Interestingly, this is from 2016, before the publication of her debut, Conversations with Friends.)

I read it, and loved it.

Then this morning I decided to take the latest Granta magazine (‘Generic Love Story’) into the bath with me for a lazy Sunday morning read, and there she was again, in the form of an actual extract from the book. (You can read it online.)

I read it, and loved it too, and finished with teary eyes.

Although this isn’t the main point of this post, I’ll say briefly that my reasons for loving it are more or less the same reasons other people have mentioned in reviews and online: that Rooney makes you care about the characters, which is perhaps an unfashionable thing; but also she seems utterly contemporary. This comes partly in the depiction of contemporary attitudes – to relationships, to sex – or rather of the contemporary ways of conceptualizing attitudes that themselves are probably as old as the hills; and also partly in the smooth integration of contemporary technology etc into the narrative, but also in the way the prose seems alive to the texture of life today.

One example: in the Granta extract, teenage Connell’s mother puts the kettle on, something that has happened countless times in realist prose fiction since the invention of kettles, or realism, whichever came first, but this time we get this: “She laughed, fixing the kettle into its cradle and hitting the switch.” And I realise that’s the first time I’ve had a writer notice that that’s how kettles work these days. (Perhaps someone else has used it, but I missed it.) And if Rooney is noticing that, then what else is she noticing about modern life? The kettle moment is like a concrete token offered to reader that encourages them to believe that the more intangible things she’s noticing (do young people really think like that about sex?) are credible also.

Now as it happens I’m off out to my local bookshop shortly to buy a book as a present (in fact it may well be a copy of Conversations with Friends) and so I’m asking myself: should I get Normal People? I’m sure I’ll like it. There is also a definite thrill to buying a new book to read straightaway when I’m not exactly short of other books that I either want to read or feel I should.

But… here’s the thing: it’s hardback, and I don’t want to read Normal People in hardback. Nor do I want to have the hardback of Normal People on my shelves.

Well, there are bad and shallow reasons why I might feel this. She’s a female writer is the most obvious one, and I don’t want to accord her the status of hardback author. She’s a paperback writer, to quote George Harrison out of context. Do I think this? I hope not. Or rather: the status thing is true. Not everything is worth buying in hardback. But I hope that my measuring of her worth doesn’t involve sexism.

Let’s take a step back.Admission: I own five out of the six Knausgaard books in hardback, and I haven’t read them all. (I bought most of them full price, some of them secondhand. I may have got one of them as a press copy I think.) Anyone who has read Chris McCrudden’s Twitter threads (here and here for instance) on the publishing industry will recognize the symbolism of this.

Knausgaard’s British publishers know they will get all their money from hardback completists; he simply doesn’t have a wide enough readership to make any money in paperback. McCrudden’s comparison author is Elena Ferrante, whose publisher Europa Editions sells her in paperback only, and sells far more copies. (Although Europa don’t produce hardbacks as a rule, so it’s not an entirely fair comparison.)

The main thrust of this post is this: why do we even bother with hardbacks anymore? Or, to rephrase it, why do we bother with dual editions of books?

This still seems caught up the culture of reviewing, which, as a books reviewer myself, I know is waaaay outdated. I still remember the first time I saw some of my own words on the back of a paperback edition of a book I had reviewed and, yes, it was a thrill, but it seems clear that the importance of reviewing is declining, for obvious reasons to do with the decline of print (or paid-for) journalism, but also a lack of interest in traditional criticism.

So are you paying the extra £3/£4/£5 for a hardback because you want the bigger, fancier object, or because you want to be reading it now? I’m buying Ali Smith’s seasonal novels as they come out, but I’m furious at the pricing. £16.99 for these beautifully produced but, let’s say, hardly epic books seems astonishingly greedy – and, like the Knausgaard, seems predicated on the fact that people, having bought the first one in hardback, are likely to feel resigned to completing the set.

(By people I mean people like me. Readers like me. Not ‘normal people’, ‘normal readers’, at all.)

Independent presses are by and large avoiding the issue by simply producing a single paperback edition of all their books – why the fuss? – or, like Galley Beggar, bringing out a collector’s edition and a cheaper edition at the same time. This seems eminently sensible.

The assumption behind this seems to be that either these publishers aren’t expecting to get reviews in the books pages or don’t think these make much difference. And one effect of this is that it is more incumbent on publishers to get hold of pre-publication endorsements, so they’ve got something to put on the back cover of their books in place of the review quotes. The changing face of ‘critical culture’ is obviously far more complex than this in terms of how books are marketed and discussed, but let’s leave it there at the moment.

But back to Normal People, and another reason why I hesitate to buy the hardback. It’s not just that I don’t want the hardback of this book on my shelves, for whatever more or less dubious reason; it’s also that I actually, positively, want to own, and read, the paperback version.

Why? Because if this is a book that I love, it’s going to be a book that I’ll cram in my bag, read in the bath, scribble all over, and, crucially, lend to people. Normal People, from what I’m reading about it – and I see this confirmed in the extracts I’ve read – is something of a generational find, a book that chimes with readers on a level other than the solitary and readerly. It’s a book you want to talk about, rather than keep to yourself, rather in the way that The Secret History was, or is. Now I love that book. I loved it when I first read it (a borrowed copy, I think) and I love it still. But my copy of The Secret Historyis battered, dog-eared, loaned and returned, loaned, unreturned and rebought. I do not and would not want a hardback copy of that book. Sally Rooney’s book seems the same.

So I’m going out to the bookshop. If they have Normal People there I’ll pick it up. Maybe I’ll buy it, maybe I won’t. But this certain: I’d have been far more likely to buy it if it wasn’t in hardback.

I’ve called this post A Graphic Index Part IV because it links to other earlier posts putting down – very unsystematically – my thoughts about books as objects, print-vs-digital and so on. The others are here:

Put the book back on the shelf: the Graphic Index to your Mind you never knew you had

Graphic Index Part II: so just how will an ebook remind me I’ve read it?